With the “blessing” of Pope Francis, several officials working in the Vatican are preparing to go on the field, becoming for the first time into the first women’s soccer team in the Vatican, whose debut will be held on May 26 against the women’s team of AS Roma of the Women’s Serie A, according to the British newspaper The Guardian.

The Vatican women’s team will be made up mostly of workers, who work in different areas, and relatives of Vatican employees, such as mothers, wives, and daughters. This initiative responds to a series of projects in sports promoted by the Holy See, as happened last January, with the creation of an athletics branch composed of priests, nuns and members of the Swiss Guard.

Although the Vatican is not a member of FIFA and therefore does not participate in international competitions, for 48 years, the Vatican has had a men’s football team, so now, they’re opening this space to women to represent them in such important event.

The team is currently being led by the secretary of the Women’s Association in the Vatican, Susan Volpini, as part of Sports in the Vatican, the group that organizes football matches in that state. 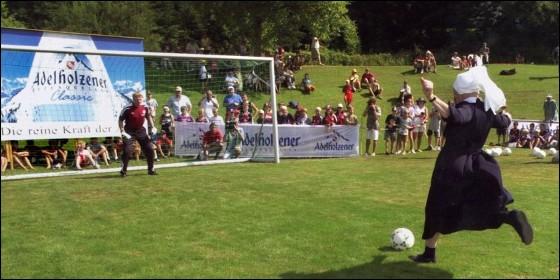 In these days, the players are training hard for the first game next week, which will be followed by an international meeting in Vienna in June, to participate in a championship organized by the Bambino Gesù pediatric hospital.

According to Danilo Zennaro, Sports representative in the Vatican, “Pope Francis has given a considerable boost to women in the Vatican,” he told the Guardian, adding that while the match against AS Roma represents a great challenge for the new team, since it reached the 4th place in the first season of the women’s Serie A, “what matters is that these women have the opportunity to meet professional players (…). Even if they lose 20-0. ”

According to the Vatican, the new team, which still does not have nuns registered as players, has had an important assessment as a boost to the inclusion of women.

Currently, the Vatican has about 800 officials, including the laity who work in fields such as mail service, health, and others. “We are certainly open to the nuns joining, the only stipulation is that they should be employees of the Vatican,” said Zennaro.

All the good luck to the Vatican Women’s team, who is another clear step of the integration and love given to women’s football in these years and the ones to come. And who knows… Maybe one day, we can see them at the Women’s World Cup.