It was a couple weeks ago when we talked about it, but now, it’s finally a reality: The Vatican Women’s team is now a thing. And it’s clearly here to stay.

The women’s football team of the Holy See played their afternoon match against Roma’s women team yesterday for their first time in history. Under the incessant rain that hit the capital yesterday, at the Sports Centre of the Knights of Columbus, the players officially started the reality that unites the employees, wives, and children of Vatican staff. “A debut against such a strong team, it’s never easy,” said the coach of the Vatican team Gianfranco Guadagnoli after the friendly match. “The important thing was to start, to start this fantastic initiative.” “They (the players) are part of a reality that pretends to have fun, but also to improve and create something that can continue in the future.”

A union between football and the world of women, which in the Vatican literally takes the words of Pope Francis, as Guadagnoli points out: “The Pope always invites us to confront each other, to unite, to speak to each other, and from there comes an activity of this type.”

The Pope sent his “auspicious” greeting, expressing his appreciation for the significant event destined to promote mutual knowledgement and fraternal sharing among those at the service of the Holy See.”

The first match of the Vatican women’s team was “a unique emotion,” expressed Francesca Stoppa, footballer and medical doctor of the Vatican.

“This game meant for all intents to enter this sport and practice it,” Stoppa said.

“The message we want to send is that whoever can play, even if football is seen much more like a male sport.” “We are proof that we can also have fun at the amateur level and we invite everyone to come and see us.”

For the players of the Vatican team, the real success of the day “was to have a large public presence” on the main field of the Sports Center, with about three hundred people in attendance.

From the sporting point of view, the match was unidirectional, with a resounding    10-0 defeat, thanks in part to the great difference in level between the professional AS Roma players and the Vatican side. The game, which lasted forty minutes, twenty every half, gave important indications to the Vatican players, who began to approach the rules and the way of being on the field playing 11-a-side. 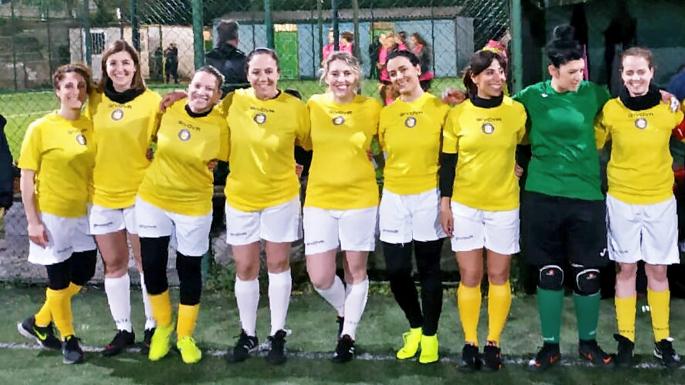 However, both teams faced the match with the right spirit and competitive commitment, which beyond the final score, is “the message that a team of this kind wants to give” as Federica Di Lorenzo said.

The young Vatican soccer player underlined the importance of “conveying the concept that women, even in sports, can give so much and that’s why it’s important that the Vatican also has its own women’s team.”

We here hope we can see these kinds of initiatives in the men’s and women’s game more often in the future, as they’re a clear example of how football should be: Enjoyed and played by everyone, without thinking of race, religion, sex or otherwise. Playing the beautiful game the way it’s supposed to.