The 2019 year is getting to end, and it has clearly been another great year for women’s football, which continues to grow at an incredible pace. Let’s hope next year (and decade) is “the year of women’s football” once again, but we need to give praise to all the people who have been involved, especially the players.

Surprisingly, it was the World Cup that made Van Veenendaal stand out and brought her nominations for several awards this year. Oddly, the Netherlands No 1 often found herself on the bench for Arsenal during their title-winning campaign and switched England for Spain and Atlético Madrid in the summer.

Van Veenendaal’s key contributions came in the summer as she did everything right to take her team to the World Cup final. She withstood pressure from Japan, kept a clean sheet against Italy and it is likely the Dutch would never have made the final had it not been for her save from Nilla Fischer’s effort for Sweden in the semi. She thwarted the USA several times in the final before Megan Rapinoe beat her from the spot but she reminded everyone just how much ability she has.

But by far, she was definitely the best at her position this year. 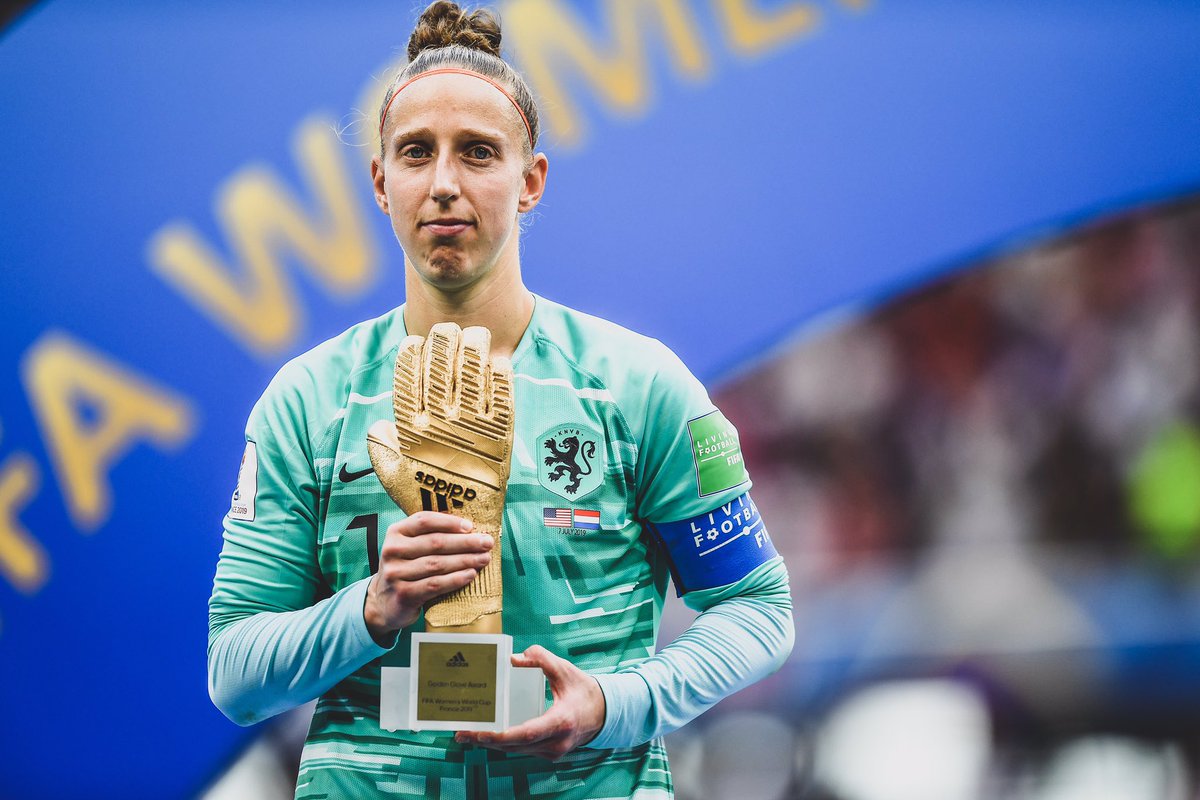 Some, including her international manager, believe Bronze to be the best in the world and while many may dispute it, there is no doubt she is out front as the best in her position. Bronze ranks inside the top five for the third year running and only narrowly misses out on the top spot.

After her performance in the World Cup quarter-final win against Norway in which she cracked in a stunning goal from the edge of the penalty area, she was the name being touted for all the awards but a sub-par performance in the semi-final largely put paid to that. She did, though, win UEFA’s Player of the Year award and was a Ballon d’Or nominee. She once again won the league with Lyon and another Champions League in devastating fashion against Barcelona and it feels as if Bronze is a player fully comfortable with her role and embracing how good she is. 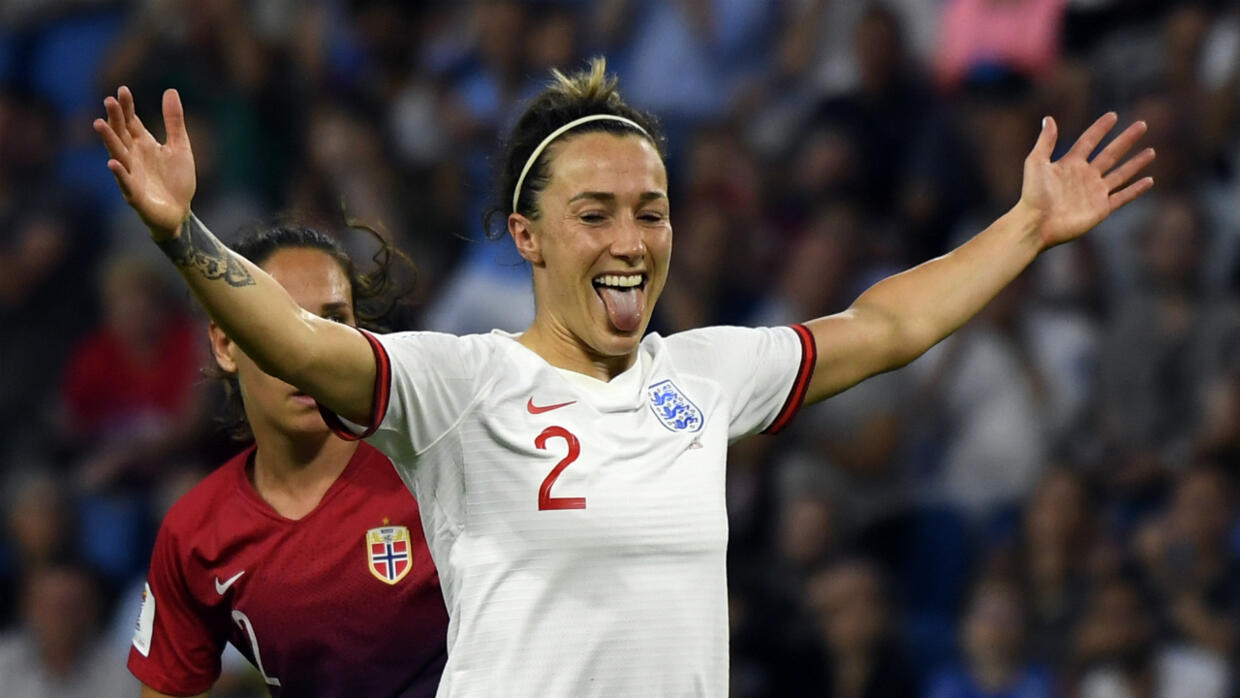 More used to the center-back role, Wendie Renard continues to show remarkable consistency every year, considered the highest-ranked center-back in the world. When you captain the top club in Europe (and one of the leading nations) and win as much as Renard does, it is hard to argue against her quality.

Her incredible stature and aerial ability also make her a goal threat; she scored eight times for Lyon last season and has three already this time around domestically. She led her club to another Champions League title and remarkably has a hat-trick in the competition already this season, against Ryazan in the first round. At the World Cup Renard became France’s go-to scorer, finding the net three times in the group stage, again against the USA in the quarter-finals, with a bizarre own goal against Norway the only blot on her copybook. Overall, it was another stellar year for one of the best defenders in the world.

Our final defender needed to be solid, hardworking, and efficient… Clearly, this team needs Steph Houghton!

The first half of the year went well for the Manchester City and England captain. She led her club to a domestic cup double and scored a memorable free-kick against the USA as she got her hands on a trophy with England at the SheBelieves Cup. She would almost duplicate that effort when England beat Cameroon at the World Cup, where Houghton propped up a defense that kept four clean sheets in a row on the way to the semi-finals.

Unfortunately, a late penalty miss in the semi-final against the US was the lasting memory of the World Cup and not one Houghton deserved. She has returned to Manchester City and enjoyed a relatively solid start to the season as she looks to add more honors and possibly an Olympic medal in 2020. 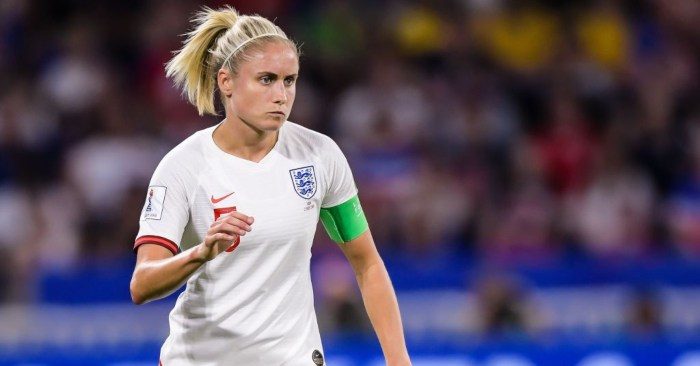 Julie Ertz has arguably been the best defensive midfielder in the game this year:

She has played a critical role for both Chicago Red Stars, as they reached the NWSL final, and the USA in winning another World Cup. Tenacious, combative and strong in the tackle, Ertz is the ideal midfielder and does the dirty work necessary for any successful side. Still versatile from her days as a center-back, Ertz has made the holding midfield role her own and played every minute of the knockout stages in France as her team marched to a second World Cup in a row.

Amandine Henry is probably for many the top-ranked midfielder in 2019, as she rises up a position after another superb year.

She’s simply the all-round midfielder, with the ability to pass, score, dictate and be a crucial cog for the most successful club in Europe. Henry does not score many goals but when she does they tend to be big ones, her only club goal in the first half of 2019 coming in the Champions League semi-final win against Chelsea.

Maybe Henry was saving her goals for the biggest stage of all as she struck a beauty in France’s opening game of the World Cup before popping up with a winner in extra-time of their second-round match against Brazil. But goals are only a small part of Henry’s game; what makes her great is that she has so much more. She has returned to Lyon in fine form, is at the peak of her game and has added a goal or two more in the new season. 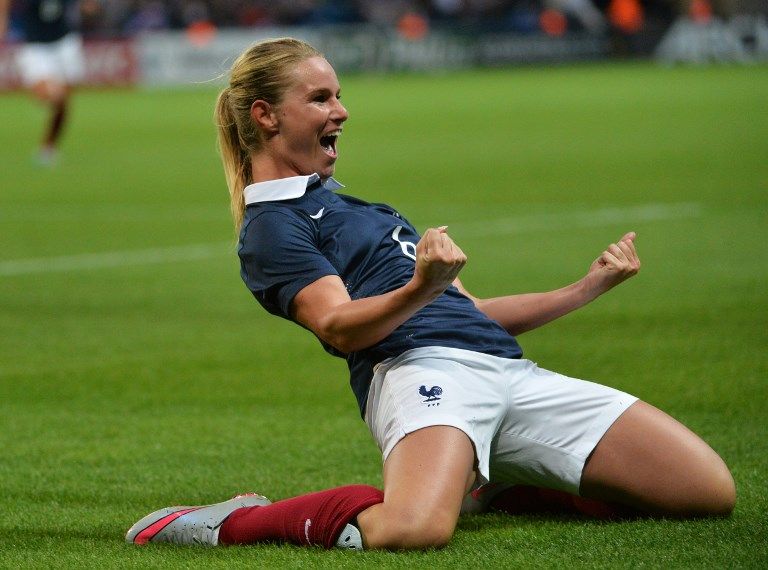 On the other side, I couldn’t put non-other than “the Dutch Leo Messi of women’s football”: Lieke Martens.

Who knows in which direction Martens’ year would have gone had an injury at the World Cup not effectively ended it early. She started the year in fine style for Barcelona, finding the net four times in January and February and looked in good form heading into the World Cup, scoring in five consecutive matches for club and country. Her highlight of the tournament came against Japan in the second round when her two goals sent the Dutch into the quarter-finals. She returned from injury at the start of December, in a thumping 6-1 win against Deportivo, and she will now be hoping to quickly get back to her best. 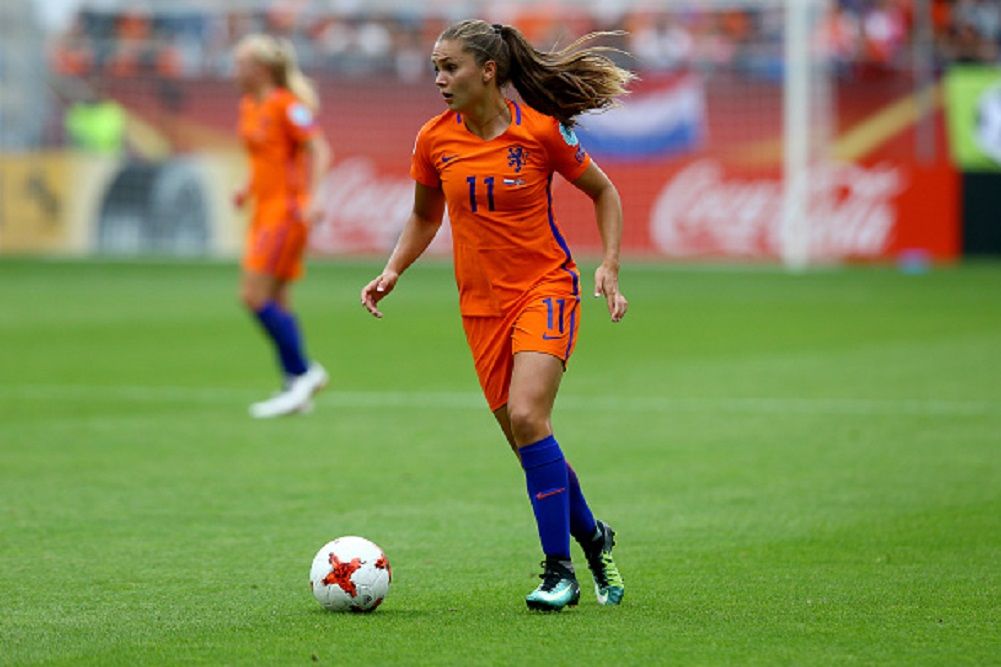 No one has broken into the world-class players quite like Rose Lavelle this 2019. A frustrating run of injuries has kept Lavelle out of the top flight but her contribution to the USA’s World Cup campaign has earned her a spot on my best XI.

The ease with which Lavelle travels with the ball is a joy to behold and her deceptive pace and trickery give even the best defenders little chance of stopping her. Her gliding to the edge of the box, side-stepping her marker and smashing the ball past Sari van Veenendaal in the World Cup final was one of the standout moments of the tournament. But Lavelle’s contribution was felt throughout, from her two goals against Thailand to her dazzling display against England in the semi-finals. 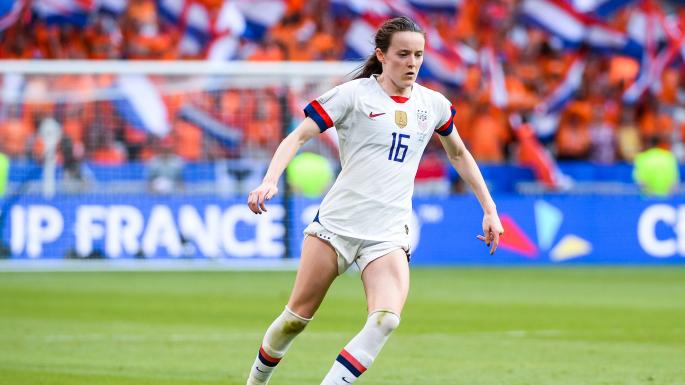 Our final midfielder is another American, Tobin Heath, and it’s not surprising to see her in this XI as the USA was the team of 2019.

It’s true that Heath did not score any goal during her World Cup campaign, however, her contribution was no less for it and it was her pull-back that led to Megan Rapinoe’s second goal against the hosts in Paris.

Heath’s energy, trickery, and skill on the USA’s right-wing caused endless problems for opponents, Spain in particular in the second round, while she remained a key performer for Portland Thorns too. Overall, she hit double figures for goals for club and country, setting up plenty more along the way in another highly productive year. 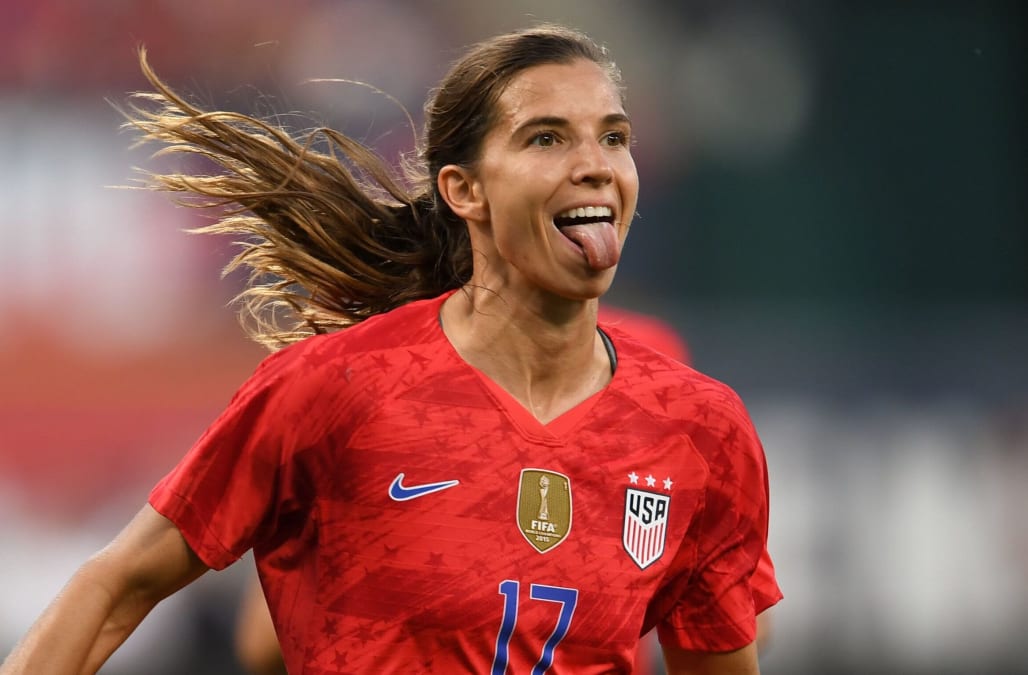 Without a doubt, Megan Rapinoe has saved her best for the biggest occasion in 2019.

Her domestic year amounted to a handful of games and no goals, but the month in which she led the USA to a World Cup triumph will live long in the memory. Rapinoe used her skill, movement, and precision to devastating effect in the key moments in France. She kept her calm to slot home two penalties against Spain in the second round before her pinnacle came in the quarter-final against France in front of a partisan Parisian crowd.

Furthermore, her early free-kick and subsequent iconic celebration set the tone for a night that would be hers and hers only. A second-half tap-in at the back post sent the hosts packing and while she was a surprise omission for the semi-final, the left-winger returned to have the first say in the final against the Netherlands, coolly converting a penalty early in the second half to set the USA on their way.

Undoubtedly, Rapinoe’s year polarises opinion due to her lack of match action elsewhere, but there can be no argument few had a bigger influence on the USA’s back-to-back World Cup success than Rapinoe. 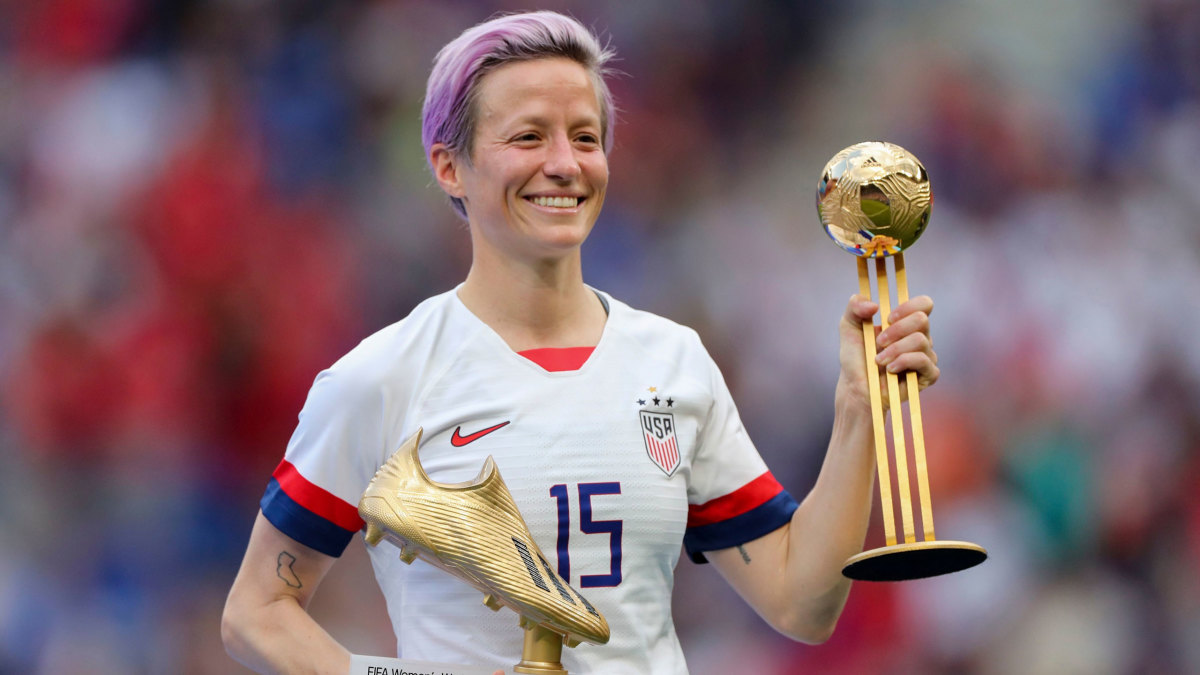 It’s true that Hegerberg dropped out of the top 3 in the race for the Ballon D’ Or, in a year where the World Cup had a big bearing on the rankings, but to be 4th after missing the tournament shows just how good the striker is and how highly regarded she is around the world.

The Norweigan striker had registered a staggering 20 goals in 14 games across all competitions for Lyon by the end of November and possesses an almost unique ability to score freely with either foot, her head or create chances for herself and others. She has two hat-tricks and five doubles to her name since the season kicked off in August. But her best moments came in the Champions League final, where an incredible 16-minute hat-trick in the first half-hour devastated Barcelona and sealed a third European trophy in a row for all-conquering Lyon. A true star, Hegerberg continues to get better and better. 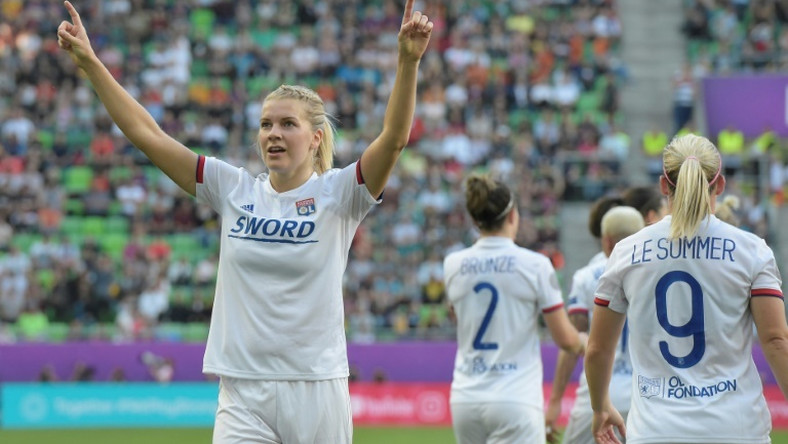