What a night to remember… Or maybe not; it depends on how you look at it.

On Saturday 9th November 2019, a record 77,768 pairs of eyes were on the Lionesses as they sought to pick up a crucial win after a poor run of results since their brilliant World Cup campaign. A very important record for women’s football in the UK, and also in the whole world, which completely beat the previous record at Wembley of 70,584 during another against Germany in 2014. However, the 80,000 record set in the London 2012 Olympics, the biggest record so far for women’s football, wasn’t able to be beaten.

Yet, Phil Neville said: “I think if we had a game in three months’ time at Wembley we would have the same crowd after what they saw from both teams. It was a fantastic spectacle, an amazing occasion.”

Unfortunately, the night for England Women’s team was a little bit bittersweet as The Lionesses end up losing (once again) to Germany (1-2). Clearly, a tough match that puts Phil Neville under pressure, after only picking up one narrow win in England’s last 6 games (4 losses, 1 draw, and 1 win). 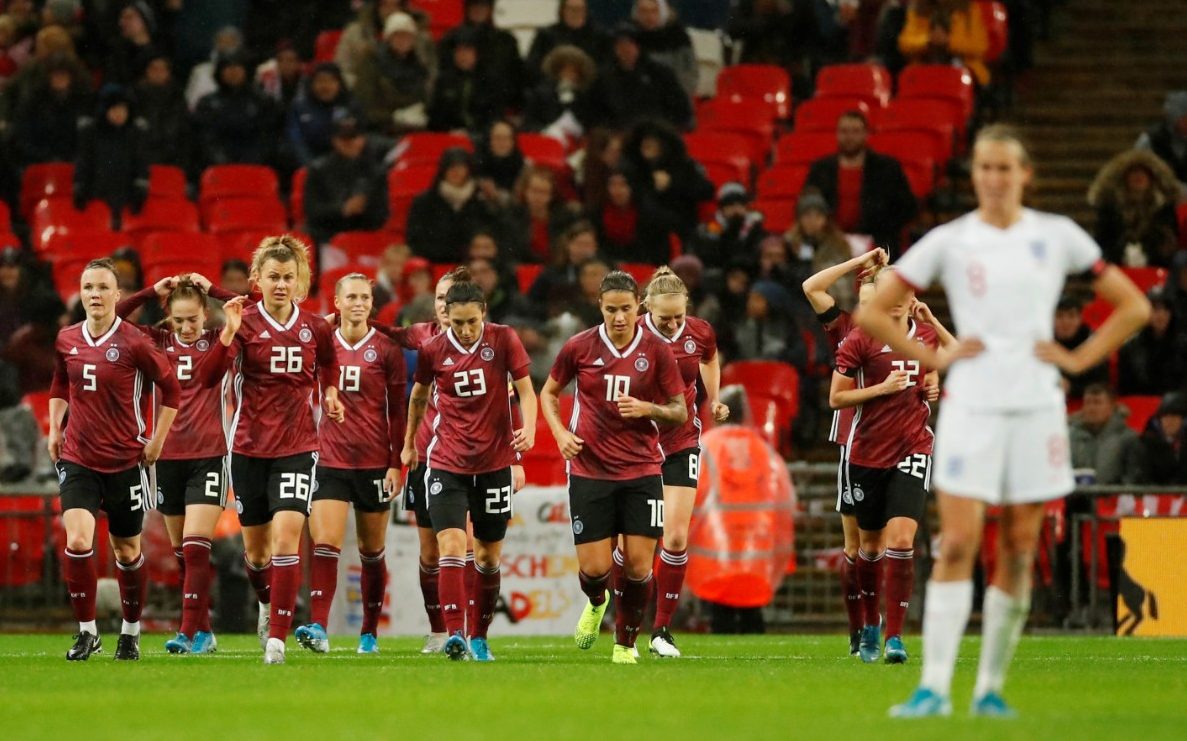 The hosts, who have only played once before at Wembley, couldn’t start worst the game, as they saw themselves a goal down after 9 minutes. Alexandra Popp opened the score for the Germans, thanks to Hendrich, who was allowed far too much space to fire a cross into the box, and which Popp finally headed pass Mary Earps (0-1).

The game continued slow, but with the Die Nationalelf was completely dominating the game panorama at Wembley. Yet, Manchester City striker and England’s superstar Ellen White appeared to tie the match in the 44′. (1-1) Previously, Nikita Parris had the chance to equalize from Germany’s penalty spot early on, however, the ball went into the legs of Frohms, who luckily save the Germans. At least, for a bit.

England, who had lost 20 out of 25 meetings with the Germans, seemed to be in good form and spirit when the first half ended; unfortunately, it all changed on the second one.

Lina Magull slid a shot past Manchester United keeper Earps to give Germany back the lead, but the flag went up and her effort was ruled out. It was just the first jumpscare for England of what was really coming in the end.

After a tough contest, in the 89th minute, Buhl whacked the ball past Earps (1-2), after Houghton failed to close her down, hammering the final nail in England’s coffin. It seems “The German Curse” will continue for a little bit longer. But now is not time to think about it.

The Lionesses, who are playing friendlies in preparation for Euro 2021 on home soil, travel to the Czech Republic on Tuesday for their final match of the calendar year. Will they be able to recover and win this one, or, on the contrary, will continue with their bad games’ streak? Only they know the answer.