Skip to content
The Best Fifa Football Awards are finally here, and while Messi, Ronaldo, and Virgil Van Dijk start fighting to claim the Men’s Award this year, we cannot forget the great show these other footballers performed in the Women’s World Cup in France this year: Lucy Bronze, Alex Morgan, and Megan Rapinoe.
Only one will be crowned Best Women’s Player at the Best FIFA Football Awards on Monday night. Who will take the award back home?

Everyone knows that Brazil forward Marta won last year’s award, but, this time, we are guaranteed a new winner, with England’s Lucy Bronze, while the USA is represented by its perfect duo, Alex Morgan, and Megan Rapinoe; all of them named as the final three.
As I said “Only one will be crowned Best Women’s Player at the BFFA (Best Friends Forever Awards… JK!)”, so… How good have the three players been this year? Who deserves to win the award? Let’s have a look into their stats:
Lucy Bronze

According to England’s coach Phil Neville: “Lucy Bronze is the best player in the world, without a shadow of a doubt, with her athleticism and quality. There’s no player like her in the world.” (Clearly, we know who’s her favorite, right?)
And those words are undoubtedly well deserved. The 27-year-old defender was the most consistent player for the Lionesses during its World Cup participation: A player-of-the-match performance against Norway, including a stunning long-range goal, as England made it into the semi-finals of the Women’s World Cup.
Bronze’s 2019 World Cup Stats:
Furthermore, her performances at France 2019, where she was an ever-present as England reached the last four, earned her the Silver Ball as the tournament’s second-best player, behind USA’s captain Megan Rapinoe. The English player also had a really good domestic season with Lyon, winning the league title and the French Cup, culminating it with a Champions League win in the final over FC Barcelona (4-1).
Finally, Bronze became the first defender to win UEFA Women’s Player of the Year award in August. She already knows what it means to win trophies like this, so… Could she become the first women defender to win the FIFA Women’s Best Player as well?
Alex Morgan 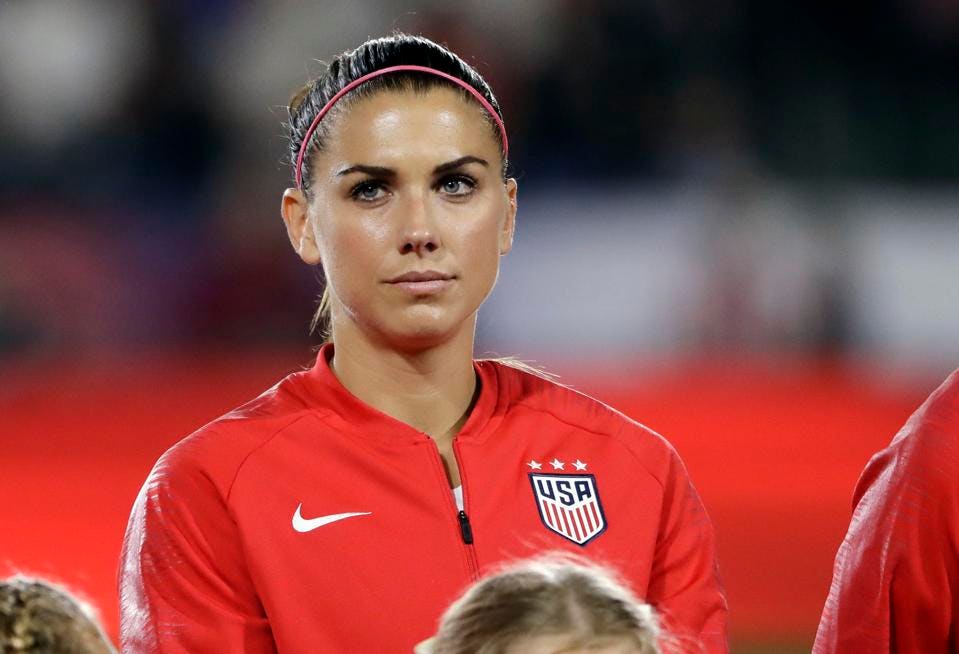 Now, on the American side, Rapinoe’s international team-mate also played a key role in USA’s record-breaking 4th Women’s World Cup win.
Alex Morgan finished level with Rapinoe on 6 goals and 3 assists for the tournament to take home the Silver Boot, only missing out on the top-scoring honor by minutes per goal. During her journey for USA’s 4th World Cup, she became the second woman in history to score 5 goals in one single game as the USA beat Thailand 13-0 (I watched that match… IT WAS F***** MENTAL!!). Only Michelle Akers (USA) finished with 10 goals, during the first tournament held in China in 1991, a record that still stands.
Morgan’s 2019 World Cup Stats:
Anyway, the 30-year-old striker was the key to get to the final once again, as she headed the winning goal against England at France 2019. She was also named the CONCACAF player of 2018 for a 3rd successive time; and finally, the Orlando Pride player scored 18 goals in just 19 appearances for her national team in 2018. Evidently, after all those performances, Morgan couldn’t miss out this award, am I right?
Megan Rapinoe 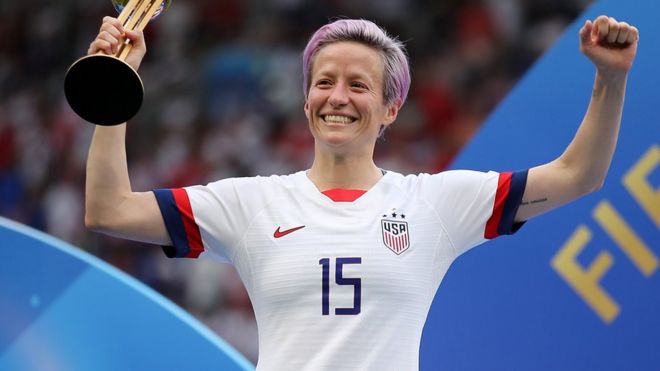 Of course, Megan Rapinoe was going to be here: Yes, or yes!
The USA captain took home the trophy for the second time in a row. She scored the opener in the final, won the Golden Boot for being top scorer and the Golden Ball for the best player. Is she not clearly the best candidate to win the whole damn thing? If you don’t think so… Look at those stats!
Rapinoe’s 2019 World Cup Stats:
Rapinoe, who finished the World Cup with 6 goals and 3 assists, also has made a huge impact off the field over the summer. She has been a key figure in the fight for equal pay for the women’s team and has also spoken out on social justice issues in the United States.
She defied US President Donald Trump (Who doesn’t this days?), also told FIFA they lack respect for the women’s game (Have you seen the videogame?) and also made clear her LGBTQ+ allegiance. RESPECT!
Rapinoe, who has played for seven clubs across three continents, also helped her club Reign FC into the National Women’s Soccer League playoffs. With all said, my prediction is going to be “Megan Rapinoe” as the big winner, however, anything can happen. After all… We are talking about football here.