Ok… It’s true that Norway didn’t have its best football star in this World Cup, Ada Hegerberg, as she’s fighting for the rights of women in this sport. All the good luck, Ada! Anyways, that doesn’t imply anything in the match played today, where the Lionesses showed how good they have turned over the years.

The match couldn’t start better for the side led by Phil Neville: Just 3 minutes in, England scored the first goal of the game. A terrific run down the right flank by Lucy Bronze, who entered without problem Norway’s area and placed a ball towards White, who mistimed her kick and instead the ball fell straight into the path of Jill Scott, who fired it into the bottom corner (It touched the post, ok?) and went in over the frustration of Norway’s keeper Ingrid Hjelmseth. Clearly… It couldn’t have started much better! 0-1! Norway was missing their touch and was feeling how their encounter with England was going to end the same way it ended last time they faced in 2015: With a loss for them, and a win for the Lionesses, who get into their second consecutive semifinal. England wasn’t giving any chance for free to their opponents, as they kept pressing and pressing, almost scoring their second goal a little bit before it was supposed to. Parris and White had two clear chances to make the 2nd goal of the game earlier on, but both failed to convert, either going to wide, some superb saves by Hjelmseth or hitting the post. GOD DAMN YOU, POOOOST!

It took a while, but just 5 minutes before the end of the first half (40th minute), Ellen White finally made the 2nd for the British team: White slotted the ball from close range, after a marvelous run by Lyon’s striker Nikita Parris down the right wing. The English winger used her pace to beat her marker and then squared with precision to White, who, unmarked, just needed to score into the back of an empty net. 0-2! HALF TIME! What a start! 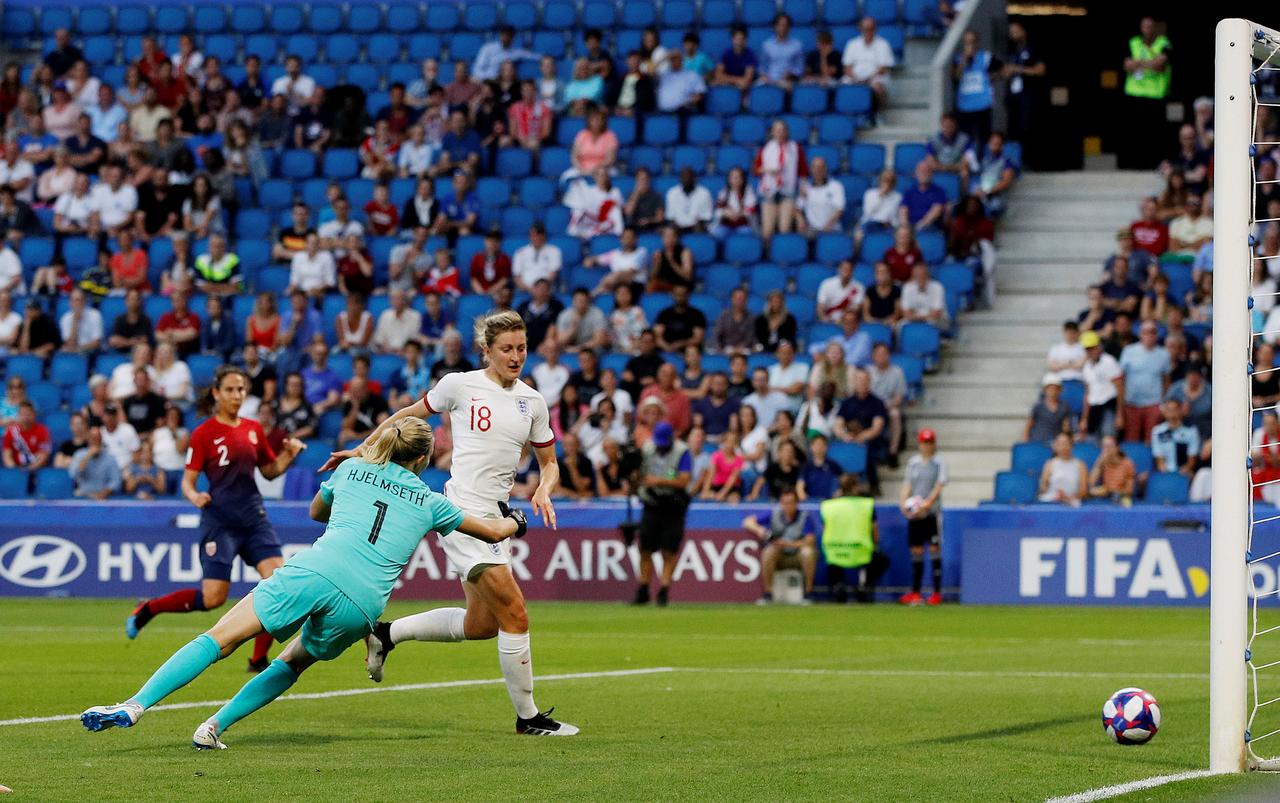 The second half couldn’t start better… For Norway! The Norwegians seemed to didn’t give up yet (Strange), and looked more compact than in the first half, where England was the clear dominant force. On the 47th minute, Hansen got completely unmarked in England’s area, after they worked very well a ball that “somehow” ended up there for her, but, thank god, England’s captain Steph Houghton got back and recovered the ball to save her team from a dangerous situation.

But, in the end, that fighting spirit didn’t last long, as England’s Lucy Bronze made the 3rd on the 57th minute. And what should I say? What was that!?

The right-back wasn’t picked up on the edge of the Norwegian penalty area as Mead drilled the ball out to her, and Bronze just blasted into the goal from… 20 YARDS OUT!? Hjelmseth couldn’t stop it! Too much power! 0-3! (A great power comes with great responsibilities)

Still, Norway didn’t give up (again) and could have scored a goal, if it wasn’t for Houghton (again) becoming England’s savior in the worst scenarios. On the 66th minute, striker Utland got in-behind England’s defense, after a poor back pass from Bright and goalkeeper Bardsley was unable to reach the ball. The forward took it past the English goalie from a tight angle, but, unfortunately, Houghton was there again to make a superb block and clear the ball off the line. What a defender!

Then, a couple saves for both teams, and then… A PENALTY!? (What a surprise!)

This time, VAR didn’t appear as the foul was clearer than water, however, the penalty was saved in the end by Hjelmshet. The shot from Parris went to the left side, which the Norwegian giant was able to predict as well as stopping a bigger defeat (82nd minute). And that was pretty much it! END OF THE MATCH!

Norway has been eliminated from the Women’s World Cup by England once again, after losing in 2015 against their rivals. Meanwhile, the Lionesses should be happy and celebrating, as they go through the semis of the tournament for a second consecutive time, and where they will face either Germany or Sweden (At least, it’s not the USA). Now, my question is: Will England reach the final of the Women’s World Cup this year? (As I said, at least we’re not facing the USA until the final round)