After Saturday’s wins from Germany and Norway over Nigeria and Australia respectively, England and France have passed to the quarter-finals of this amazing Women’s World Cup, after beating Cameroon and Brazil in their way through. Before I began with the amazing display from the Lionesses, I would like to do a little mention of the clash between France and Brazil:

The match ended in a 2-1 win for the tournament hosts, who saw how their team won in the extra time, thanks to a goal from its captain Amandine Henry (106th minute). Brazil tried its best to continue in a game they were losing in the 52nd minute as Gauvin placed a beautiful ball in Brazil’s bottom corner. They tied the match thanks to Thaisa’s goal just 30 minutes before the final whistle (63rd minute), but, in the end, the result ended in favor of the French girls.

Ok! Now, let’s move on with our Lionesses:

It was the first time England and Cameroon faced each other in Women’s World Cup history. England hadn’t had a good time in the knockout stage for a long time, but it seems that time has finally passed.

The game started in a perfect way for England, who grabbed the lead just 14 minutes into the match. Defender and England’s captain Steph Houghton was the one to make the first for her team: Houghton was waiting a long time for the free-kick to be taken, so when the referee allowed it, Barcelona’s Toni Duggan just rolled the ball to her and aimed a perfect low shot to the bottom right corner, which Cameroon keeper Ngo Ndom couldn’t reach. 1-0!

England began to start showing her confidence and technique to their rivals, who couldn’t do anything really to change the situation. On the 21st minute, Toni Duggan had a great chance to make England lead 2-0 in the scoreline earlier than it was later on: A wonderful build-up play from the team ended with Fran Kirby slipping the ball through Duggan on the edge of the box. Sadly, the shot went to wide. No celebration in these play I guess.

Cameroon defended pretty roughly but England didn’t have problems to deal with the situation. Just before the first half concluded, Ellen White appeared again for England and made this time the second goal for Phil Neville’s team. On the 45th + 4 minute, VAR (Hi! Did you miss me?) allowed her goal, after it was proven she was onside during the time she scored. White was completely unmarked in the middle and when Bronze played her the ball very nicely, she just calmly slotted the shot into Ndom’s bottom corner. 2-0! HALFTIME!

Time for some second half action. Should we?

The second part was very dominated by the Cameroonians, who tried all they could to turn around the game’s situation. Unfortunately, Bardsley was there to save the day for England, making great stops against Takounda, the real danger from Cameroon’s team. In the end, Alex Greenwood, with another assist from Toni Duggan, scored the final 3-0 of the game and gave a complete win to the team. A corner in the 58th minute was played just straight, and Greenwood, very smartly, made a run onto Cameroon’s penalty spot, hitting the ball so hard, it passed all three players trying to stop her. Didn’t work! 3-0! 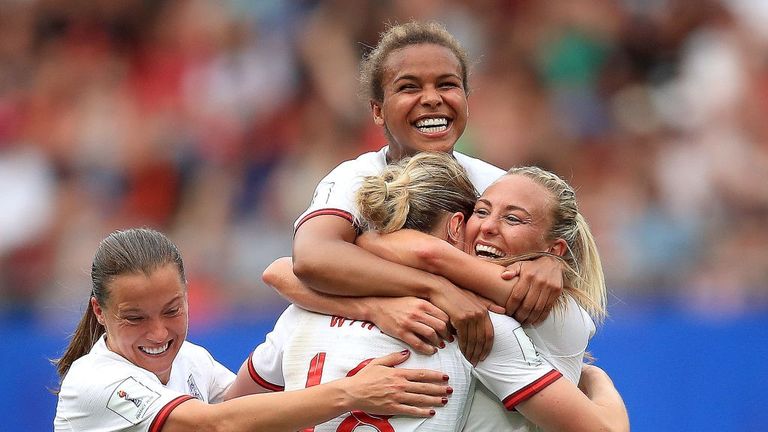 After that, Toni Duggan and Fran Kirby had very close chances to expand the score, but the ball just went wide all the time. Then, some substitutions, some yellow cards, some irrelevant VAR… And that was it! END OF THE MATCH!

With this win, England is through to the Women’s World Cup quarter-finals, where the Lionesses will face Norway, a hard opponent, but who miss their best star, Ada Hegerberg, in this tournament’s edition. Now, the question is in the air: Who’ll win the Women’s World Cup? (I would like to say England, but all my money is bet on the USA)