What a terrible start…

England’s defense of their SheBelieves Cup title got off to a disappointing start as two quick second-half goals condemned them to defeat against world champions in Orlando.

It was the sixth defeat in nine games for Phil Neville’s side, who have struggled for form since losing to the USA in the World Cup semi-finals. Christen Press’s superb long-range curler put the hosts ahead shortly after half-time and Carli Lloyd, the game’s MVP, made it 2-0 two minutes later. 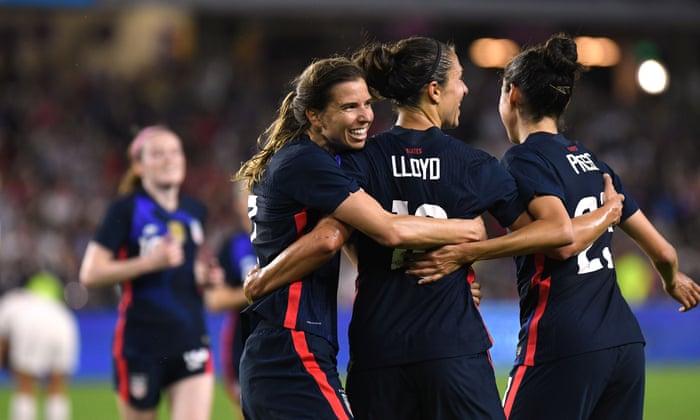 Midfielder Julie Ertz also had a goal ruled out for offside late in the second half as the USA went on to dominate. The World Cup winners had numerous chances, Lindsey Horan and Rose Lavelle were denied in the first half, while England’s Nikita Parris was offside when she had a close-range header saved.

England faces Japan, ranked 10th in the world, in their next match at the Red Bull Arena in New Jersey on Sunday, 8 March, before playing Spain in the final match of the round event

On the other side, earlier on Thursday, tournament debutants, Spain beat Japan 3-1 at the Exploria Stadium.

The opening goal came just eight minutes into the match on a quick transition that got midfielder Marta Cardona free down the right side. She pushed through a tackle from a Japanese defender and then cut a pass back to captain Jennifer Hermoso inside the penalty box.

Japan had a chance to equalize in the 14th minute when Yuika Sugasawa got behind the defense, but her bending shot was well-saved by Spain goalkeeper Lola Gallardo.

Spain had the better of the chances before the break. In the 33rd minute, Patri Guijarro smashed a shot from 25 yards out straight away that was palmed away by Japan goalkeeper Ayaka Yamashita with a low drive. Two minutes later, Putellas struck a shot from the top of the box that flew just inches outside the left post.

Those misses were a blessing for Japan, who tied the game in the 44th minute on a great effort from Iwabuchi, the smallest player on the field. Risa Shimizu crossed from deep on the right-wing and Iwabuchi ran under the falling ball, sliding at the top of the box to hit an unusual full volley that looped over Gallardo and into the net from 18 yards out.

The teams went into halftime tied but Spain took the lead soon after the break. After miss-hitting her shot on a chance moments earlier, Lucía Garcia won the ball deep in the Japanese defensive third by picking off a square pass. She then raced in on goal on the right side of the penalty area, deftly touched the ball around Yamashita, ran around the other side of her, then slid to knock the ball into the open net from just a few yards away, albeit from a steep angle.

Garcia almost added to the lead twice, first in the 67th as she brought down a long ball and moved past one defender, then lifted the ball over another and raced into on goal. In the 75th minute, she also ran onto a looping pass behind the defense and tried to lift the ball over Yamashita, but the Japanese goalkeeper made another good save.

In the end, her pressure paid off again with the insurance goal in the 78th minute when she again won the ball in the back from Japan, this time out-muscling veteran defender Saki Kumagai. She ran through everyone and slot home, once again, into the open net from 11 yards out to cap her brace of spectacular dribbles and scores.

Tomorrow, they will face the USA again, after playing against them in last year’s World Cup. Definitely, a must-watch match!