I know… Megan Rapinoe has won ‘The Best’ to being the best women football this 2019, having won the Women’s World Cup with the USA, and the Player of the Competition as well as the Golden Boot as well, after a tight contest with Alex Morgan and Lucy Bronze (Is there anything she hasn’t won this year?); so, clearly, she can be considered “women’s football” iconic talisman at the moment, right?

But… What about legendary Brazilian striker Marta? Did everyone forget about her? Here’s a tribute to such amazing footballer, and who stills scoring goals like Messi scoring free-kicks.

Marta. What can I say about her?

The Brazilian legend is the all-time top scorer for her country, has been a flag-bearer at a home Olympics, received a phone call from legendary striker Pele when she was a teenager and is largely considered the greatest player of her generation. Is not that enough? Don’t worry; there’s more:

Marta is a scoring machine, making her the most lethal player on the planet.

Marta’s 7 goals in China in 2007 led Brazil to its first Women’s World Cup final (Unfortunately, they didn’t win). Anyway, at this year’s tournament in France, the 33-year-old became the first player to score at 5 World Cups with a penalty against Australia. Then, less than a week later, her goal in a 1-0 win over Italy made her the all-time leading goal scorer in World Cup history with 17, moving ahead of Germany men’s striker Miroslav Klose (16). With 112 goals in 147 appearances, Marta has a better minutes-per-goal ratio than any other Brazilian (men and women), and she has netted more than a quarter of her side’s World Cup goals. But Marta is not all about goals… But goals have given her trophies, so…

Impressively, Marta has been named the Best Fifa Women’s Footballer a record 6 times. Between 2006 and 2010, Marta won five successive Fifa World Player of the Year awards and remains the only female footballer to have won more than three times. F***** IMPRESSIVE!

Her 6th award was in 2018 when she beat German midfielder Dzsenifer Marozsan and Ballon d’Or winner Ada Hegerberg. The Brazilian has also been placed inside the top three a further seven times, and made the Best XI in 2016, 2017 and 2019, with only France’s Wendie Renard has been included on more occasions (4).

She has also won several top scorer prizes playing for clubs in Sweden and America, plus the Golden Ball award for the best player at the 2004 Under-19 World Cup, then both the Golden Ball and the Golden Boot at the senior World Cup in 2007. So, could you say she has more trophies than men’s football GOAT, Leo Messi? Is it not that outstanding?

Marta should be considered as women football “Maxime Momenti Hominem” (most important person in Latin, OK?), as she has inspired a new generation of women footballers, and has fought for equality in women’s football.

Following Brazil’s last-16 exit in France, Marta gave an emotional speech calling on young players to follow in her generation’s footsteps: “Women’s football depends on you to survive,” she said. “Think about it, value it more. We’re asking for support, you have to cry at the beginning and smile at the end.

“Let me be clear, this is not only in sport. This is a struggle for equality across the board,” she added. 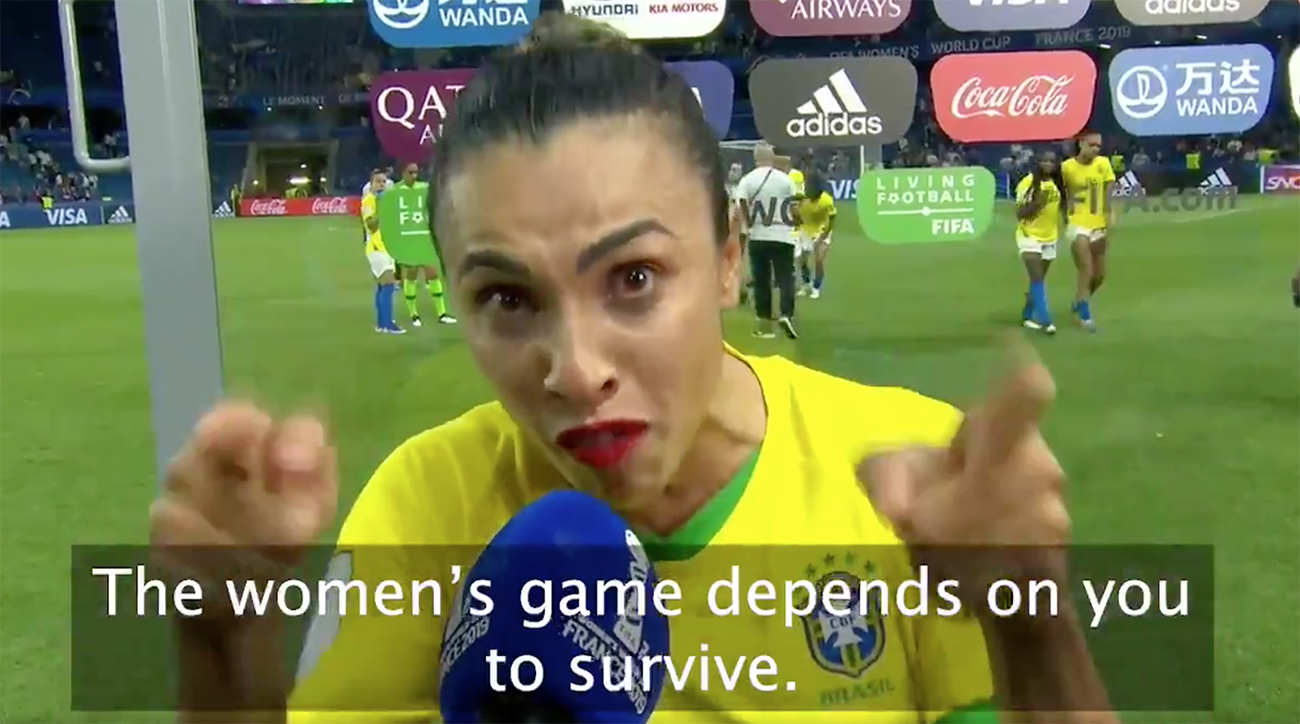 Like Lionel Messi with Argentina, Marta’s brilliance has not been enough to lead Brazil to World Cup glory. The 2nd-place finish in 2007 was the closest she came, while Olympic gold medals have slipped through her grasp on two occasions.

When you talk of Brazilian footballers, you think of three-time world champion Pele, and iconic striker “fat” Ronaldo who picked up the Golden Ball at the 1998 World Cup and the Golden Shoe in 2002. But undoubtedly, Marta has certainly done her bit for Brazil’s football history. Have you seen those crazy skills!?

Now, Marta still has 33 years-old, but she has the passion and power to continue playing, so she’ll definitely achieve the World Cup glory before retiring (Before Messi maybe?). A footballer no one should forget; the true key to women’s football success. Thank you for those crazy skills videos, Marta!