What just happened? Can someone explain what I just witness? Is this even football?

For sure, this is not something you and I are used to, especially with such boring matches like the Champions League and the Nations League final. But wait! You might be asking yourself what am I talking about. Very easy…

13 Reasons Why the United States is going to win the current Women’s World Cup in France. Literally! Thirteen are the goals that the nation of Thailand has suffered this Monday, 11th June, where North America has clearly made history.

IT’S OFFICIAL! The United States Women have achieved the biggest win in the history of the World Cups! Clearly, they have set a precedent that will last for years after defeating mercilessly their opponents from Thailand.

The big star of the show was Alex Morgan, who led her teammates with 5 goals in her personal account. She’s now the top scorer of the tournament. With only one match played? A resounding 13-0 in favor of the combination of the Stars and Stripes. With this, they leave behind the mark that Germany had with an 11-0 against Argentina in the Group Stage of the Women’s World Cup in 2007. I still cannot believe it…

It took 12 years for the record imposed by the German team to be overcome and today the United States has achieved it in an astonishing way. With these 5 goals against Thailand, the historic USA forward becomes the second USA player to score five goals in the same World Cup match. The first to achieve this was Michelle Akers.

In addition, Alex Morgan reached 107 goals with the United States and thus also tied Michelle Akers in fifth place in the scoring chart. Anyways, let’s move on with what really matters now: What exactly happened? How did the Thailand wall fall in just a couple minutes of the second half?

It all begun with the United States dominating the game from minute one of the game, the first goal was slow to arrive, but just twelve minutes in, Alex Morgan was clinical against Thailand’s goalkeeper and opened the scoreboard. Lavelle scored the second in the 20th minute, followed by lethal goalscorer thunder, Lindsey Horan, who was in charge of making the third, after a free kick pass, before the end of the first half. 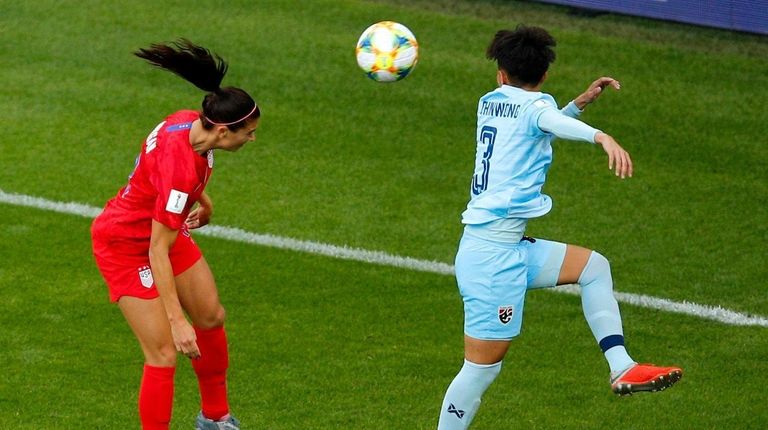 The second half became a pure goal party… But for the United States, who completely demolished Thailand and couldn’t do anything to stop them. Goal after goal… Sam Mewis made the 4th, and then, 3 more goals came in succession. Morgan, Mewis, and Lavelle: One after another.

In the end, I think everyone lost count. With the Thailand defense completely torn apart, Morgan obtained her hat-trick in the 74th minute, after a beautiful shot with so much class, Thailand’s goalkeeper couldn’t reach. Megan Rapinoe, Pugh and two more from Morgan looked like the end to the party (12-0). But that wasn’t all…

Carli Lloyd who was desperately looking to join her teammates in celebration scored her goal in the last 92nd minute. With this, the United States earn 13 poi… I mean 3 hard and demolishing earned points against a poor Thailand, and are at the top of the wor… I mean the top of Group F, with Sweden behind in 2nd place.

I’m scared, and everyone should be scared of this team. Watch out world: The United States are here and they are here to win by 13 goals or more! (If not, just ask Thailand)