It’s true that Spain has been for years one of the innovators and main promoter of women’s football in Europe and all around the world.

Many countries have copied their style, but now, changes are happening. And let’s be clear: Right now, there are two realities coexist in Spanish women’s football.

Although it fills great stadiums in a timely manner, like the most notorious case with Atletico and Barcelona clash, its explosion does not hide the shortcomings that it drags from the base, due to the lack of uniformity in the betting of the women’s clubs.

As a counterpoint to the ambitious Barcelona project, there are templates in which there is only one professional license; others, in which foreign women are a large majority, even tripling the number of Spanish women. Sometimes the bridge to extra-community transfers, signed in the First Women’s Division, is a student visa and often the employment relationship is constituted by a 10-hour weekly contract.

“In a top-flight league, it is not credible that there may be such contracts, but they do happen. It is not sustained because only with the displacement and the party you already have 10 hours left,” said lawyer María José López to Spanish outlets, who represents AFE in the negotiation of the collective agreement for all professional women players in Spain. 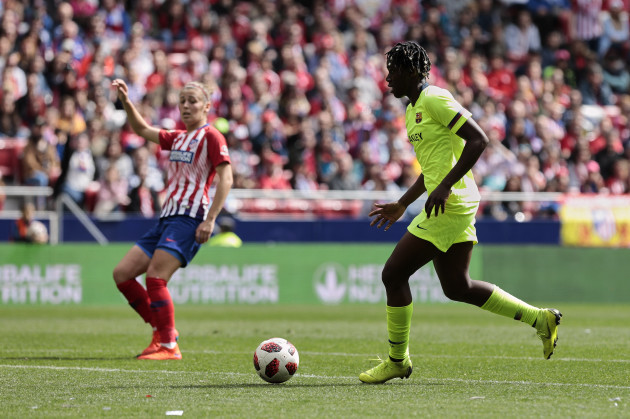 In a context in which there is an obvious lack of professionalism, a phrase justifies the transformation that the body presided by Luis Rubiales intends to implement if it receives this Monday the approval of the extraordinary general assembly.

“We do not want women’s football to be the victim of their own success,” said RFEF sources consulted by EFE. With this premise, the general secretary of the organization, Andreu Camps, addressed the women’s clubs last March. He did not question “the success of today’s competition”, but he did attack the weaknesses of the current model through its reformulation, with an Elite Division and a Division Promises.

According to the documentation presented to the clubs and to which EFE had access, the RFEF will require the entities participating in the Elite Division that a minimum of 14 players has a license. In the Promises Division, that number will be reduced to 6. In addition, “non-professional players under 20 years old will be able to play indistinctly in the two categories” if a club has a team in both.

In defense of quarry football, the federation will also require that at least 6 players “have played a minimum of 3 years in the same club in lower categories”, both in the Elite Division and in the Promises, and that the administrative, sports infrastructure and the equipment have enough minimums.

Its implementation would not be immediate but there will be a time to meet these requirements, as set out in the working tables. In this context, the membership criteria initially proposed for the respect of sporting merits and not their affiliation to a male club were also rejected.

The RFEF, which would make a direct economic contribution to the players in concept of image rights, of 1,000 euros in Promises and 2,000 in Elite, also expressed its intention that “a minimum number of players” have a full-time contract, with a guaranteed minimum salary for the Elite Division and minimum interprofessional in the Promises Division.

The Wage and Social Aid Guarantee Fund (maternity, training, etc.) would also enter into this new model, in which the RFEF guarantees a minimum contribution to the clubs for the development of the competition, the distribution among the registered clubs of public aid to the Social Security contribution and a minimum contribution of 1 million euros for the image rights in the competition for the participating players, according to the documentation to which EFE had access.

This new model was found from its approach with the rejection of the Association of Women’s Soccer Clubs, which brings together 14 of the 16 teams of the Iberdrola League, all; except Athletic Club and Barcelona. They consider that the new model was built hastily and apart from the clubs.

With them, it had been agreed, however, the restructuring of the Second Division and the creation of a First Division B, of 32 teams, which should be launched next season.

Now, multiple questions come to mind: Should not the format have changed with the Association of Clubs? Is that change going to be decided by referees or football players? Or why change a model of competition that has led to this situation?

Anyways, the change is done, with the expectation of knowing what’s going to happen afterward.